Heroines Who Reclaim Their Narratives: Naima Simone’s Only for a Night 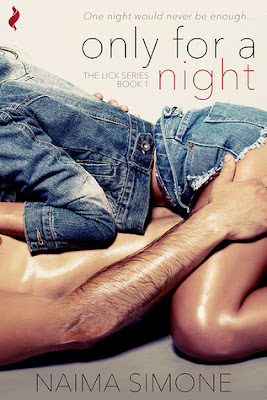 One of the many things I love about Romance novels is that a lot of the stories are about women reclaiming and reshaping their personal narrative into something that speaks of happiness, agency, and love. In Naima Simone’s Only for a Night, Harper has been widowed for two years and she’s mourning the loss of her child and husband, but most importantly, the loss of her own sense of self and worth to the years she gave to an unfulfilling marriage. So, like many heroines before her, she decides that even if her grief will probably always be there, she can do one thing that’s purely for herself, something she always wanted and never got: she can have amazing, hot sex. In order to do that, she seeks the help of a man she used to love when she was young, a man with whom she shares a lot of history, but who also happens to own a sex club or, as the novel puts it, “the hottest and most exclusive aphrodisiac club” which means that in this universe there are enough similar clubs to justify the clarification that this one is the best, and that we have officially moved up from secret sex dungeons. She goes to him, not because she loved him (although this is a Romance so there’s some of that) but because he has what she wants and needs.

This is a story about a woman who didn’t know good sex until the hero showed her everything, which I don’t love, but there are two key elements that spoke to me and tempered my initial rejection of the trope. First, the heroines always knew she wasn’t having good sex, and she didn’t blame it on herself. She tried to talk her husband into spicing things up, but he shut her down in ways that were pretty abusive, which did chip away at her confidence, but these are all things she realizes on her own, things she’s resolved to change. And second, she’s the one who pursues the hero. He doesn’t have to gently cajole her out of her shell, she’s already out and ready for what’s to come. She’s taking control of her life. She’s reclaiming her narrative.

Anger shoved the hurt aside, surging hot and hard inside her. She’d been dismissed, shelved, or patronized too often in her life. She’d also been mute, opting to remain silent, not rock the boat. Not voice her needs, her wants…her desires. Years ago, he’d been the first person to teach that confessing what—or who—you needed resulted in rejection, humiliation. Terrance had solidified that lesson. Well, that time had passed.
She was tired of living—no, existing—in a cocoon that was supposed to be safe but was really suffocating.
And he didn’t get to push her back into that cocoon.


When the hero dares to imply that she doesn’t know what she wants, she quickly informs him that he’s full of shit.

Are you telling me that because of sex I don’t know my own mind?” He parted his lips, but she slammed up a hand. “Never mind. I’ve had enough of people instructing me on what I mean, what I’m thinking, and what I need. If you don’t want me, that’s one thing. But please don’t patronize me.


This isn’t a perfect book. The hero is a pretty standard alpha who used to be a member of the Irish mob (!) and now runs the aforementioned aphrodisiac club (!!) and maybe has a threesome with one of his brothers (!!!) I think he’s just a very close friend, but at one point I thought he was the brother, so I want you to share in my (misplaced) shock.  And did I say that this is a novella? So it’s not as if we spend much time on him, and even if he’s not at all the center of the story, we could’ve toned down the angst and still have plenty of stuff to mine tension from. But, you know, Irish mobster who owns a sex club is all anyone will ever need to know to make an informed decision on whether this book will work for them or not, so I can’t say that I didn’t know exactly what I was getting into. So, not a perfect book, but a pretty great heroine who embodies a lot of the qualities that make this genre special.